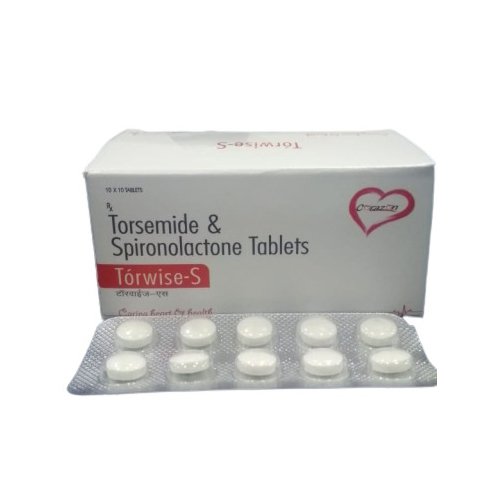 
Dosage : As directed by physician

Mechanism of Action
• Torsemide is part of the loop diuretics and thus, it acts by reducing the oxygen demand in the medullary thick ascending loop of Henle. Torsemide is known to have an effect in the renin-angiotensin-aldosterone system by inhibiting the downstream cascade after the activation of angiotensin II. This inhibition will produce a secondary effect marked by the reduction of the expression of aldosterone synthase, TGF-B1 and thromboxane A2 and a reduction on the aldosterone receptor binding.
• Spironolactone is structurally similar to progesterone and as a result is associated with progestogenic and antiandrogenic effects. Spironolactone competitively inhibits aldosterone dependant sodium potassium exchange channels in the distal convoluted tubule. This action leads to increased sodium and water excretion, but more potassium retention. The increased excretion of water leads to diuretic and also antihypertensive effects.

Pharmacology
• Torsemide
Absorption
Torsemide is the diuretic with the highest oral bioavailability even in advanced stages of chronic kidney disease. This bioavailability tends to be higher than 80% regardless of the patient condition.

Distribution
The volume of distribution of torsemide is 0.2 L/kg.

Excretion
Torsemide is mainly hepatically processed and excreted in the feces from which about 70-80% of the administered dose is excreted by this pathway. On the other hand, about 20-30% of the administered dose is found in the urine.
• Spironolactone
Absorption
Spironolactone reaches a maximum concentration in 2.6 hours and an active metabolite (canrenone) reaches a maximum concentration in 4.3 hours. When taken with food, the bioavailability of spironolactone increases to 95.4%
Distribution
Volume of distribution data is not readily available.
Excretion
Spironolactone are excreted 42-56% in urine, and 14.2-14.6% in the  feces. No unmetabolized spironolactone is present in the urine.