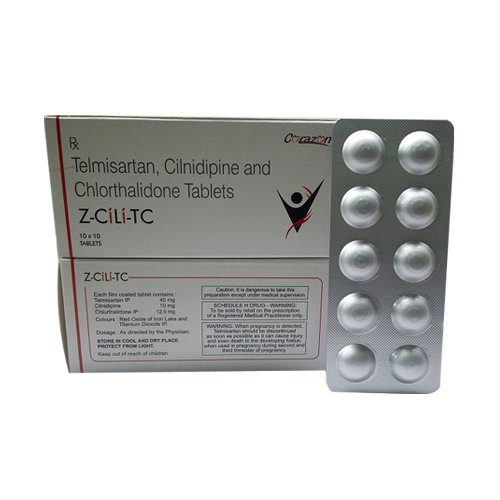 Telmisartan is an angiotensin II receptor antagonist (ARB) used in the management of hypertension.

Chlorthalidone is a thiazide-like diuretic used for the treatment of hypertension and for management of edema caused by conditions such as heart failure or renal impairment.
Indications
• Cilnidipine +Telmisartan + Chlothalidone is used in the treatment of Hypertension (high blood pressure)
Mechanism of action
Cilnidipine acts on the L-type calcium channels and blocks the incoming calcium and suppressing the contraction of blood vessels, thereby reducing blood pressure. It also acts on the N-type calcium channel located at the end of the sympathetic nerve, inhibiting the emission of nor-epinephrine and decreases the blood pressure.

Telmisartan interferes with the binding of angiotensin II to the angiotensin II AT1-receptor by binding reversibly and selectively to the receptors in vascular smooth muscle and the adrenal gland.

Chlorthalidone is a thiazide-like diuretic used for the treatment of hypertension and for management of edema caused by conditions such as heart failure or renal impairment.
Dosage
As prescribed by the physician.
Pharmacology
Absorption
Cilnidipine absorbs very rapidly and attains a maximum peaked concentration after 2 hours. Its distribution tends to be higher in the liver as well as in kidneys, plasma and other tissues.
Telmisartan’s bioavailability depends on dosage. Food slightly decreases the bioavailability (a decrease of about 6% is seen when the 40-mg dose is administered with food).

Chlorthalidone prevents reabsorption of sodium and chloride through inhibition of the Na+/Cl- symporter in the cortical diluting segment of the ascending limb of the loop of Henle.
Distribution
Clinidipine’s   distribution is higher in the liver as well as in kidneys, plasma and other tissues. It doesn’t present a high accumulation in the tissue after repeated oral administration. Cilnidipine is reported to present very low bioavailability, approximately 13%.
The Volume of distribution of Telmisartan is 500 L.
Chlorthalidone has been shown to rapidly concentrate within erythrocytes and subsequently equilibrate via a slow diffusion back into the serum compartment, resulting in a large volume of distribution.
Excretion
Cilnidipine excretes through the urine in a proportion of 20% of the administered dose and 80% is eliminated by the feces.
Most the Telmisartan’s administered dose (>97%) eliminates unchanged in feces via biliary excretion; only minute amounts were found in the urine.

Approximately 50% of the administered dose is excreted unmetabolized through the kidney, and excretion is characterized by biphasic elimination with a rapid phase followed by a slow secretory phase.
Precautions
Inform your physician, if you are
• Not  not  safe to  use during pregnancy
• Precautions should be taken  if you have skin allergy or breathing problems
Contraindications
• Cardiogenic shock, recent MI or acute unstable angina; severe aortic stenosis