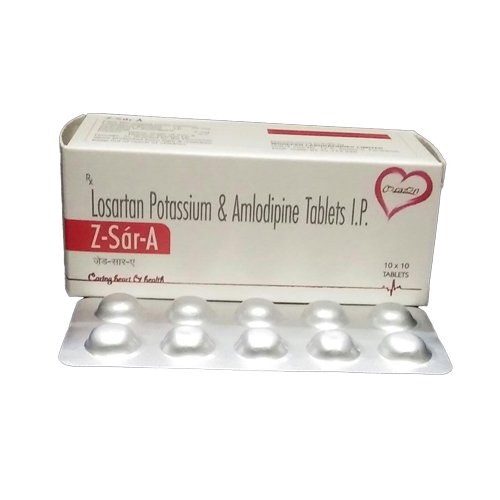 
Dosage : As directed by the physician
Mechanism of action
Losartan Potassium
Losartan reversibly and competitively prevents angiotensin II binding to the AT1 receptor in tissues like vascular smooth muscle and the adrenal gland. Losartan and its active metabolite bind the AT1 receptor with 1000 times more affinity than they bind to the AT2 receptor. Losartan's prevention of angiotensin II binding causes vascular smooth muscle relaxation, lowering blood pressure. Angiotensin II would otherwise bind to the AT1 receptor and induce vasoconstriction, raising blood pressure.
Amlodipine
Amlodipine has a strong affinity for cell membranes, modulating calcium influx by inhibiting selected membrane calcium channels. This drug's unique binding properties allow for its long-acting action and less frequent dosing regimen.
Pharmacology
• Losartan Potassium
Absorption
Losartan is approximately 33% orally bioavailable.
Distribution
The volume of distribution of losartan is 34.4±17.9L and 10.3±1.1L for the active metabolite (E-3174)
Excretion
A single oral dose of losartan leads to 4% recovery in the urine as unchanged losartan, 6% in the urine as the active metabolite.3,4 Oral radiolabelled losartan is 35% recovered in urine and 60% in feces. Intravenous radiolabelled losartan is 45% recovered in urine and 50% in feces.
• Amlodipine
Absorption
Amlodipine absorbed slowly and almost completely from the gastrointestinal tract. Peak plasma concentrations are achieved 6-12 hours after oral administration. The estimated bioavailability of amlodipine is 64-90%.
Distribution
About 97.5% of the drug is bound to plasma protein. The drug is metabolized by liver.
Excretion
Amlodipine is 10% excreted as unchanged drug in the urine.