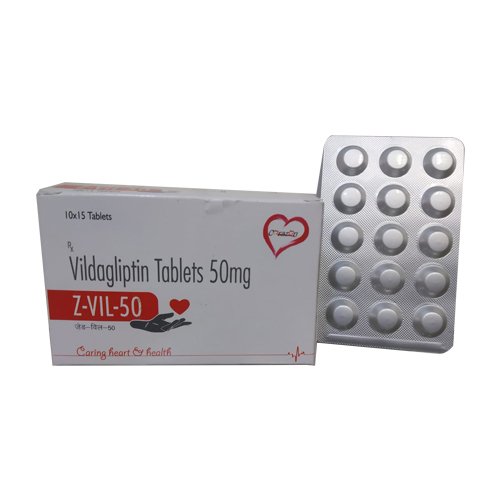 Z-VIL-50 is composed of Vildagliptin 50mg. Vildagliptin is a DPP-4 inhibitor, increases the release of insulin from the pancreas and decreases the hormones that raise blood sugar levels.
Indications
•    Type 2 diabetes Mellitus
•     Maintains the blood sugar level
Mechanism of action
Vildagliptin inhibits the inactivation of GLP-1 and GIP by DPP-4, which allows GLP-1 and GIP to initiate the secretion of insulin in the beta cells and suppress glucagon release by the alpha cells of the islets of Langerhans in the pancreas
Dosage : As prescribed by the physician
Pharmacology
Absorption
Vildagliptin is rapidly absorbed with an oral bioavailability of greater than 90% followed by oral administration.
Distribution
Vildagliptin is minimally bound to plasma proteins (9.3%) and, on the basis of a volume of distribution of 71 L, it is considered to distribute extensively into extra vascular spaces.
Excretion
Approximately one-quarter of a dose of vildagliptin is excreted unchanged by the kidneys, and the remainder metabolised by hydrolysis.
Precautions
Inform your physician, if you are
• Allergic to this medication or any of the other ingredients of this medication.
•  Pregnant, planning to become pregnant, or breastfeeding.
• Any disease of the pancreas (such as pancreatitis, which is a condition where the pancreas is inflamed)
• Gallstones, drink alcohol often or have very high levels of triglycerides (a type of cholesterol) in your blood.
• Have or had diabetic keto acidosis where there is a build-up of acid in the blood because the body is breaking down fat instead of sugar before
• Kidney or liver problems