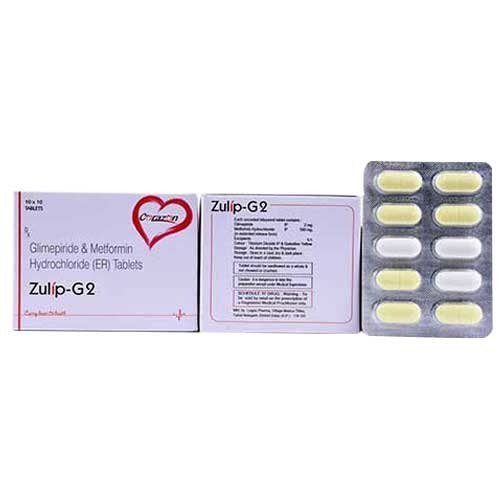 Introduction
Zulip-G2 Tablet contains glimepiride and metformin in sustainrelease form.
Glimepiride is a sulfonylurea anti-diabetic drug. It belongs to third generation anti-diabetic drug.
Metformin
It is also an oral antidiabetic drug which belongs to biguanide class which is the first line treatment for type 2 diabetes mellitus. It causes suppression of glucose production by liver.
Indication
• First line treatment for type 2 diabetes
• Metformin is used in pre-diabetes
• PCOS (polycystic ovary syndrome)
• Gastrointestinal diabetes
Dosage : As directed by the physician
Mechanism of action
Glimepiride
It causes the stimulation of insulin release from pancreatic β-cells which causes the inhibition of gluconeogenesis in hepatic cells. This also increases the insulin sensitivity.
Metformin
It decreases gluconeogenesis in liver and also decreases the intestinal absorption of glucose. It also improves the sensitivity of insulin.
Pharmacology
• Metformin
Absorption
In fasting condition of the patients, the drug bioavailability is about 50% to 60%. Food decreases the absorption of drug.
Distribution
The volume of distribution is 654±358 L. It rarely bonds to plasma protein. It does not follow hepatic metabolism.
Excretion
It is excreted in unchanged form in urine
• Glimepiride
Absorption
The drug is well absorbed with peak drug concentration attaining in 2 to 3hrs. When drug is administered with food the concentration maximum was decreased by 8%
Distribution
The drug is well distributed in the body and volume of distribution is 8.8 L. the drug is metabolized by oxidative biotransformation. In the biotransformation of glimepiride to M1, cytochrome P450 2C9 is involved. The major metabolites are the cyclohexyl hydroxy methyl derivative (M1) and the carboxyl derivative (M2).
Excretion
About 60% of the drug is excreted through urine in seven days.
Contraindications
• Use is contraindicated in pregnant patient
• In lactating mothers
• Renal dysfunction
• Patient undergoing radiological studies
• Acute or chronic metabolic acidosis
Precautions
• Renal and hepatic impairment
• Avoid alcohol consumption
• Hypoglycemic episodes
• Lung and liver disease